St. Thomas' understanding of obedience and its application in real life is founded on the sphere of authority of the superior and the nature of the order issued. 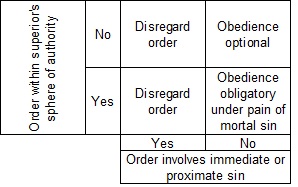 In order to understand St. Thomas, we need to dig a little deeper by asking some questions:

Did the last question catch you off guard?

I added it because the direct object of obedience is the precept of any superior (St. Thomas Summa) and a superior is one who holds authority over the inferior.  One of Liberalism's central tenets is the "abolition of the Divine right and of every kind of authority derived from God" (Catholic Encyclopedia).

This is critical, a superior has authority regardless of whether or not he is trusted by the inferior. Trust is a feeling and as a consequence if obedience was subservient to trust, you would arrive at two people obeying or disobeying commands based on whether or not they felt like it.

That is ludicrous and I have concluded negates the authority of the superior that comes from God.

As noted earlier, we know that something is against God if it contravenes Divine Law, Written Law, or Natural Law.

This is where life gets interesting, as we need to discuss three types of sin: Immediate, Proximate, Remote.

Something is immediately sinful if the action in and of itself is sinful. Proximate and Remote are occasions that may result in a person falling into sin.

Theologians distinguish between the proximate and the remote occasion. They are not altogether at one as to the precise value to be attributed to the terms. De Lugo defines proximate occasion (De poenit. disp. 14, n. 149) as one in which men of like calibre for the most part fall into mortal sin, or one in which experience points to the same result from the special weakness of a particular person. The remote occasion lacks these elements. All theologians are agreed that there is no obligation to avoid the remote occasions of sin both because this would, practically speaking, be impossible and because they do not involve serious danger of sin. Source: Catholic Encyclopedia

We are obliged to avoid the unnecessary proximate (ie near) occasions but not the remote occasions.

Digging deeper, what is sin???

Since sin is a moral evil, it is necessary in the first place to determine what is meant by evil, and in particular by moral evil. Evil is defined by St. Thomas (De malo, 2:2) as a privation of form or order or due measure. In the physical order a thing is good in proportion as it possesses being. God alone is essentiallybeing, and He alone is essentially and perfectly good. Everything else possesses but a limited being, and, in so far as it possesses being, it is good. When it has its due proportion of form and order and measure it is, in its own order and degree, good. (See GOOD.) Evil implies a deficiency in perfection, hence it cannot exist in God who is essentially and by nature good; it is found only in finite beings which, because of their origin from nothing, are subject to the privation of form or order or measure due them, and, through the opposition they encounter, are liable to an increase or decrease of the perfection they have: "for evil, in a large sense, may be described as the sum of opposition, which experience shows to exist in the universe, to the desires and needs of individuals; whence arises, among human beings at least, the suffering in which life abounds" (see EVIL).Source: Catholic Encyclopedia Sin

I think it is important to note that in addition to moral evil (sin), there is also physical and metaphysical - in the context of obedience we are concerned with morally evil actions (sinful actions) that are against God.


As regards the principle from which it proceeds sin is original or actual. The will of Adam acting as head of the human race for the conservation or loss of original justice is the cause and source of original sin. Actual sin is committed by a free personal act of the individual will. It is divided into sins of commission and omission. A sin of commission is a positive act contrary to some prohibitory precept; a sin of omission is a failure to do what is commanded. A sin of omission, however, requires a positive act whereby one wills to omit the fulfilling of a precept, or at least wills something incompatible with its fulfillment (I-II:72:5). Source: Catholic Encyclopedia Sin

Let's take a couple of examples:

The second element is the sphere of authority of the superior issuing the command.

In my SSPX article, I wrote:


The second criteria is that, the order provided by the superior must be within the "sphere of his authority". Obviously, different types of superiors have different domains in which it is licit for them to issue orders.  For example, a person's manager can only issue orders that pertain to their employment.  A religious superior can only issue orders that fall within the "mode of life" ( clerical, monastic, mendicant, military, hospitaller) as expressed by vows taken and the rule of the order.  For example, a religious superior can issue an order to transfer a member of their order to another monastery or house of the order. Source (SSPX.ca)

In my conversation with a theologian on this topic, he stated that a superior's sphere of authority is defined by Law of one form or another.  For example, the Pope's authority is described in the First Vatican Council and the Law of the Church.

The authority of superiors of religious orders and congregations are constrained by the rule of their order / congregation.  St. Thomas Aquinas refers to this with the statement that "Religious profess obedience as to the regular mode of life".  In the Catholic Encyclopedia article on religious obedience we find this is confirmed:

Obedience is not vowed absolutely, and without limit, but according to the rule of each order, for a superior cannot command anything foreign to, or outside, the rule (except in so far as he may grant dispensations from the rule). (Source: Catholic Encyclopedia)

Further, Fr. Hardon provides some insight to what is contained in a rule of life:

The very term 'regular life' implies certain rules (reulae) that those who enter a religious institute bind themselves to practice. And the less familiar Rule when referring to the Rules of Sts. Augustine, Benedict, Dominic or Francis says what is common knowledge, that each of these religious families has a mode of life that is particularized by certain requirements affecting the forms of prayer, life style, and works in the apostolate. Schools of spirituality, e.g. Benedictine or Franciscan, are also historically derived from these varied Rules of the great founders and foundresses of religious communities. (Source: The Catholic Catechism -Fr. Hardon h/t Gerard)

The sphere of authority is a key element in determining when obedience is simple obedience or perfect obedience.  The nature of the order is an over riding factor, if the order is sinful, then the subject is bound to disobey the order.

Links to other posts in this latest series on obedience