This may seem as a strange prelude to the subject of Bishop Williamson's words from 1987, but I'd like to discuss the reaction of five groups of people to information that they don't want believe.  The groups are:

I have had significant in-person or 'on-line' discussions with these 'groups' and all have something in common when confronted with a fact that is inconsistent with their perception of reality.

They change the topic in order to not have to face the possibility that their perception of the situation (ie reality) is flawed.

This is cognitive dissonance theory applied. 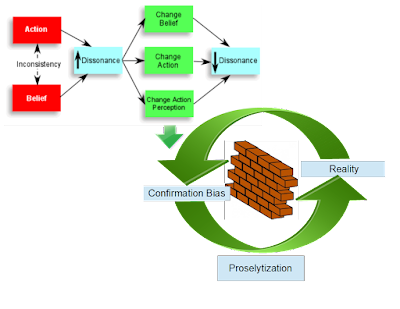 When confronted with actions that were inconsistent with their beliefs (eg Kissing the Koran is bad, but Pope St. John Paul II kissed the Koran), since changing the actions was not an option (reality sucks eh?), they were left with either changing their beliefs (ie swallow pride and admit the reality) or change their perception of the action.

Most choose to change the perception of the action, building a wall to isolate their belief from reality.

This is accomplished by a variety of cognitive errors, the one I've frequently observed is the dreaded 'confirmation bias'.  This error is the equivalent of putting on perceptual blinders and seeking only information that supports the desired perception of reality.  Anything that dis-confirms the desired perception is ignored or discounted.  This is the stuff of which conspiracy theories are made.

One consequence of altering one's perception of reality, is that it only temporarily reduces the dissonance because reality is unaltered by our desires.

Reality is such a kill-joy.

In order to convince themselves that their modified perception of reality is correct, they will seek the comfort of others.

Meaning, they will seek converts from any available pool of candidates.

This will serve to reduce the dissonance in three ways.

First, they will re-affirm their perception of reality by repeating (over and over) their arguments for why there is no contradiction between the 'action' and their 'belief'.

Second, if they manage to gain converts, it will allow the 'believer' to take refuge in another fallacy: Ad Populum.  In other words, "these people believe, therefore my perception must be right".

Thirdly, they will isolate themselves from those they cannot convince.  This will shield them from the dis-confirmation offered by the 'non-believers'. In my experience the believer will sever relations that are weaker than the belief / perception modification they are seeking to 'confirm'. I know of cases where this has included family members.

In short, this behaviour results in the 'believer' applying perceptual blinders to the information they receive.

This leads to the core subject of this posting.

The 'resistance' has a number of mantra's that they repeat to themselves and those that will listen.

We have here Bishop Williamson's 1980's outline on the various perspectives on the crisis of the Church: 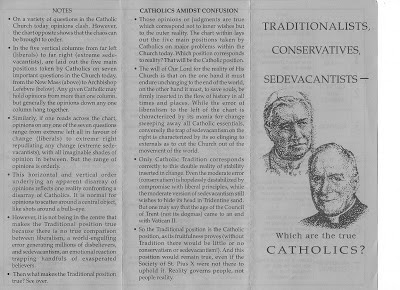 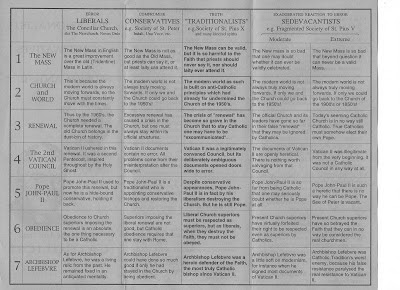 I know that a number of resistors actually hold beliefs that are consistent with the 'moderate sedevacantist' positions listed above by Bishop Williamson.

We didn't know his beliefs concerning the principle that the SSPX, in justice, deserves to be canonically regular.


I received a copy of this recording while away at the ordinations, in which Bishop Williamson (then only Father Williamson) asked those present to pray for the regularization of the SSPX.

Some resistors are on record as saying that the SSPX does not need to be regularized etc.

On that point, obviously they are at odds with Father Williamson.  Perhaps Bishop Williamson no longer believes that it is necessary.

However, that just proves the point that someone has changed.

I fully expect people to try and ignore these statements(in fact I've already noted 'resistors' re-imagining the reality).  The fact remains that Bishop Williamson stated that for the good of the Church the SSPX needs to be regularized.

If he has changed since that time, then so-be-it.  It just shows who has changed and who has not.

That's why I started this article with a re-cap on cognitive dissonance, because now the 'resistors' will have to re-spin their perception of reality in order to hold on to their beliefs.

Transcript:
... especially during today's Mass, let's pray for all those making their engagements and let's pray for the Society. Let's pray in particular for Cardinal Gagnon who's just, who today is back in the Society Seminary in Switzerland, has terminated his one month visit of the Society ... of Society houses in Switzerland, France and Germany. Ahh, let us pray that he ... when he composes his report of the Society for the Holy Father's uhh, study that the, that he present the truth in such a way that it wins the Pope's approval. Let us pray for the Pope the He may do what He quite clearly should do to give juridical standing and status to the Society which wholly deserves it and which absolutely needs it for the good of the Universal Church, let alone the Society ...