In some ways a person's perspective of the SSPX offers insight to their orthodoxy.

At least in this case it is true.

As in any point where these is a crisis, clarity is provided and here we have some more clarity.

Most honorable gentlemen,
The Cardinal Prefect of the Pontifical Commission Ecclesia Dei, Cardinal Gerhard Müller had addressed my letter of May 11, 2017,  delivered to the consideration Permanent Council in which I expressed my concern about the possibility of granting authority to the priests of the Priestly Brotherhood of St. Pius X. on (on June 1, 2017). It expresses in its reply an understanding of our concern about the "still ongoing ecclesiastical illegality of the Society of St. Pius and the situation which has not yet been clarified" and stresses that it is "in the competence of the respective local ordinarius" to whom it grants the authority to conclude a marriage. He explained that the decisions taken by Pope Francis in favor of the pastoral needs of believers are determined by the consideration that the Priestly Fraternity is on its way to full communion.
Since we are able to meet the pastoral needs of the faithful who request a marriage in the liturgy of the Vetus ordo (extraordinary rite), by applying our guidelines for the Motu Proprio Summorum Pontificum for the German dioceses of 2007, the Permanent Council of 19 June, 2017 reaffirmed its decision of April.
In order to promote uniform handling in the German (Arch) dioceses, the Permanent Council has decided to make a corresponding text proposal available to members of the Permanent Council for publication in the Official Journal ( Annex ).
In this way, in agreement with the Cardinal Prefect, we take appropriate account both of the pastoral requirements and the church circumstances.
Oremus pro invicem.
Yours sincerely,
Reinhard Cardinal Marx
Annex to the letter of the chairman of the German Bishops' Conference (PA V 3044)
In agreement with the Cardinal Prefect of the Pontifical Commission, Ecclesia Dei, the Permanent Council of 19 / June decided:
Appeals from the faithful requesting a marriage in the liturgy of the Vetus ordo(ritus extraordinarius) are to be passed on to the respective ordinaries. This will ensure that the request is taken into account and that a priest is entrusted, according to the guidelines for the Summorum Pontificum of 2017. The marriage preparation, the preparation of the marriage protocol and the registration of the marriage are carried out according to the ecclesiastical provisions. There is no provision for granting power to priests belonging to the Priestly Fraternity of St. Pius X. 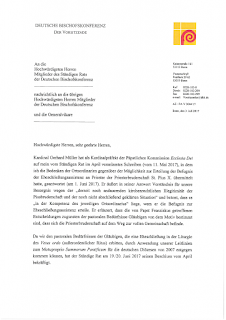 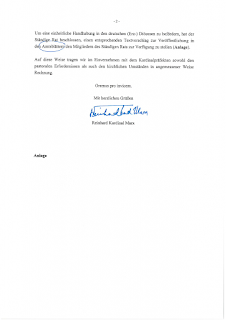 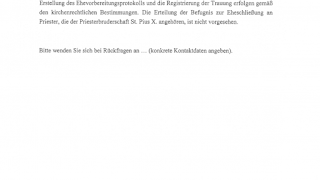 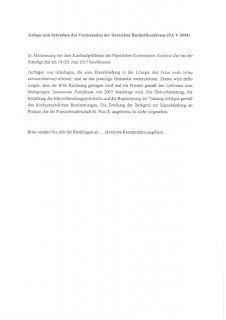