I mentioned the 'mantra' being reinforced in May and now it is public.  Rome is not willing to accept us as we are.

This does clear things up though - especially the part about the SSPX needed to accept the 1988 profession of faith.  I believe that the 'Resistance' claimed that the SSPX was going to accept that bit.

I guess that was just conjecture.

What comes to mind is this meme: 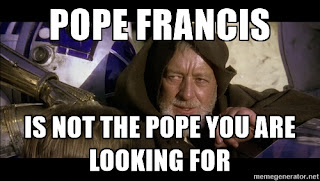 Eventually, either Pope Francis will change, die or 'retire'.

Then the next Pope will have his chance to examine the issues with the Second Vatican Council, the New Mass, Pope Francis etc.

Through all this we can arrive at one safe conclusion: The SSPX has not compromised.

For the record: Cardinal Müller's letter to Bishop Fellay on the necessary conditions for "full re-establishment of communion" with the SSPX

Last weekend, as rumors swirled of Cardinal Müller's imminent dismissal from his post as Prefect of the CDF, the French website Medias-Presse.Info published what it claimed to be an excerpt from an important letter sent by the Cardinal to Bishop Bernard Fellay regarding the conditions for an accord between the Vatican and the SSPX. Today the Remnant published an English translation of this excerpt; we reproduce the entire Remnant article below, followed by a note on the 1988 Professio Fidei mentioned in it.
Rorate's own sources have confirmed the authenticity of this text.


Cardinal Müller's Letter to Bishop Fellay
From www.medias-presse.info comes the following excerpt of a letter from Cardinal Müller to Bishop Bernard Fellay. According to www.medias-presse.info, Cardinal Müller's letter was communicated to all SSPX members by the SSPX General House.
Excerpt from Cardinal Müller's letter:
“As you know, Pope Francis has many a time manifested his benevolence towards your Priestly Society, granting, in particular, to all priest members the faculty of confessing the faithful validly and by authorizing local Ordinaries to grant licences for the celebration of the marriages of the faithful who follow the pastoral activity in your Society. Furthermore, discussions are continuing concerning questions relative to the full re-establishment of the communion of your Society with the Catholic Church.
In relation to this, with the approbation of the Sovereign Pontiff, I judged it necessary to submit to the Ordinary Session of our Congregation (which met on May 10 last) the text of the doctrinal Declaration which was transmitted to you during the meeting of June 13, 2016, as the necessary condition in view of the full re-establishment of communion. Here are the unanimous decisions of all the members of our Dicastery in this regard:
1) It is necessary to require the adhesion of the members of the Priestly Society of Saint Pius X to the new formula of the Professio Fidei dating from 1988 (c.f. annexe). Consequently, it is not sufficient to ask them to express the Professio Fidei of 1962.
2) The new text of the doctrinal Declaration must contain a paragraph in which the signatories declare in an explicit manner their acceptance of the teachings of the Second Vatican Council and those of the post-conciliar period, by granting to said doctrinal affirmations the degree of adhesion which is due to them.
3) The members of the Priestly Society of Saint Pius X must recognize not only the validity, but also the legitimacy of the Rite of the Holy Mass and of the Sacraments, according to the liturgical books promulgated after the Second Vatican Council.”
www.medias-presse.info adds that Cardinal Müller concluded the letter saying that “during the Audience granted to the Cardinal Prefect on May 20 2017, the Sovereign Pontiff approved these decisions”. The French website also adds that in his accompanying letter to SSPX priests, Father Christian Thouvenot, Secretary General of the SSPX, recalled the words of Bishop Fellay after the meeting of the major superiors in Anzère, Switzerland, on June 28 2016:
“The Society of Saint Pius X does not seek primarily a canonical recognition, to which it has a right because it is Catholic. The solution is not simply juridical. It pertains to a doctrinal position which it is imperative to manifest [...] Divine Providence will not abandon Its Church whose head is the Pope, Vicar of Jesus Christ. That is why an incontestable sign of this restoration will reside in the signified will of the Sovereign Pontiff to grant the means for re-establishing the order of the Priesthood, the Faith and Tradition – a sign which will be, furthermore, the guarantor of the necessary unity of the family of Tradition”.
***

The Professio Fidei of 1988 refers to the Professio fidei et Iusiurandum fidelitatis in suscipiendo officio nomine Ecclesiae exercendo (Formula to be used for the profession of faith and for the oath of fidelity to assume an office to be exercised in the name of the Church) dated July 1, 1988 (coincidentally the day after the 1988 episcopal consecrations in Ecône) and published in the Acta Apostolica Sedis in 1989.
The Profession of Faith is as follows:

I, N., with firm faith believe and profess each and everything that is contained in the Symbol of faith, namely:
I believe in one God, the Father almighty, maker of heaven and earth, of all things visible and invisible. I believe in one Lord Jesus Christ, the Only Begotten Son of God,
born of the Father before all ages. God from God, Light from Light, true God from true God, begotten, not made, consubstantial with the Father; through him all things were made. For us men and for our salvation he came down from heaven, and by the Holy Spirit was incarnate of the Virgin Mary, and became man. For our sake he was crucified under Pontius Pilate, he suffered death and was buried, and rose again on the third day in accordance with the Scriptures. He ascended into heaven and is seated at the right hand of the Father. He will come again in glory to judge the living and the dead and his kingdom will have no end. I believe in the Holy Spirit, the Lord, the giver of life, who proceeds from the Father and the Son, who with the Father and the Son is adored and glorified, who has spoken through the prophets. I believe in one, holy, catholic and apostolic Church. I confess one baptism for the forgiveness of sins and I look forward to the resurrection of the dead and the life of the world to come. Amen.
With firm faith, I also believe everything contained in the word of God, whether written or handed down in Tradition, which the Church, either by a solemn judgment or by the ordinary and universal Magisterium, sets forth to be believed as divinely revealed.
I also firmly accept and hold each and everything definitively proposed by the Church regarding teaching on faith and morals.
Moreover, I adhere with religious submission of will and intellect to the teachings which either the Roman Pontiff or the College of Bishops enunciate when they exercise their authentic Magisterium, even if they do not intend to proclaim these teachings by a definitive act.