The Elimination of Pockets of Resistance - II - UPDATED

As I mentioned here, 'cue Fr. Greiger', he has now responded with another counter-post.

Everything is as it is normally, however then there was this:

Yet, riding the wave of the cutting edge “reporting” of Rorate Caeli, even a “real” journalist fails to do even the least amount of due diligence before tweeting the following:

This is from someone who writes for The Weekly Standard, The Wall Street Journaland The Spectator.  But he is just “repeating” what he read on Rorate Caeli.  Now, of course, New Catholic will deny he called the FI under commission a heretical order, but that is clearly what he meant.  Why else would a friar otherwise have no way out but to abandon the priesthood?  In fact, Rorate Caeli retweeted Schulman’s smear.
But be sure, no one will take responsibility for spreading the lie that the friars who support the Apostolic Commission are heretics, nor will anyone take responsibility for having sowed the seed of dissension and despair by suggesting that friars confronted with the duty to obey the Church in difficult circumstances will have no choice but to leave the priesthood.

Here we see a perfect example of the application of a confirmation bias driven by a cultural perspective.

Here is how Fr. Greiger parsed the statement thus:


In Fr. Greger's mind, he associates the order under the 'commission' with the statement 'heretical.

However, I don't parse it the same way ... perhaps because I do not assume a malfeasance on the part of Mr. Schulman.

The FFI came under the 'commission' because of the 'crypto-lefebvrism' that Fr. Greiger opposes with such vehemence.

In short, they touched upon the cultural assumption that Fr. Greiger holds strongly: The Second Vatican Council was a great event in the life of the Church and nothing is or can be wrong with the documents.  To hold this opinion is 'heretical'.

The commision holds the FFI as 'heretical' because they dared to question the Second Vatican Council.

However, given that the FFI members being chastised for their presumption havn't denied a dogma of the Church - they are non-heretics.

I guess Fr. Greiger just seeks offense in anything that doesn't correspond to his own narrative of the events.


PS.  My wife has noted that many time, when we have been accused of something, the accuser is often guilty of the same fault.


This is a plague upon the Church and the Internet is its delivery system.  The Catholic blogosphere needs a purge.  We need to stop the rumor-mongering and vicious gossip.

I wonder if Fr. Greiger's denunciation of his confreres, superiors et al as being crypto-lefebvrists constitutes rumor-mongering and vicious gossip?

My wife is very wise. 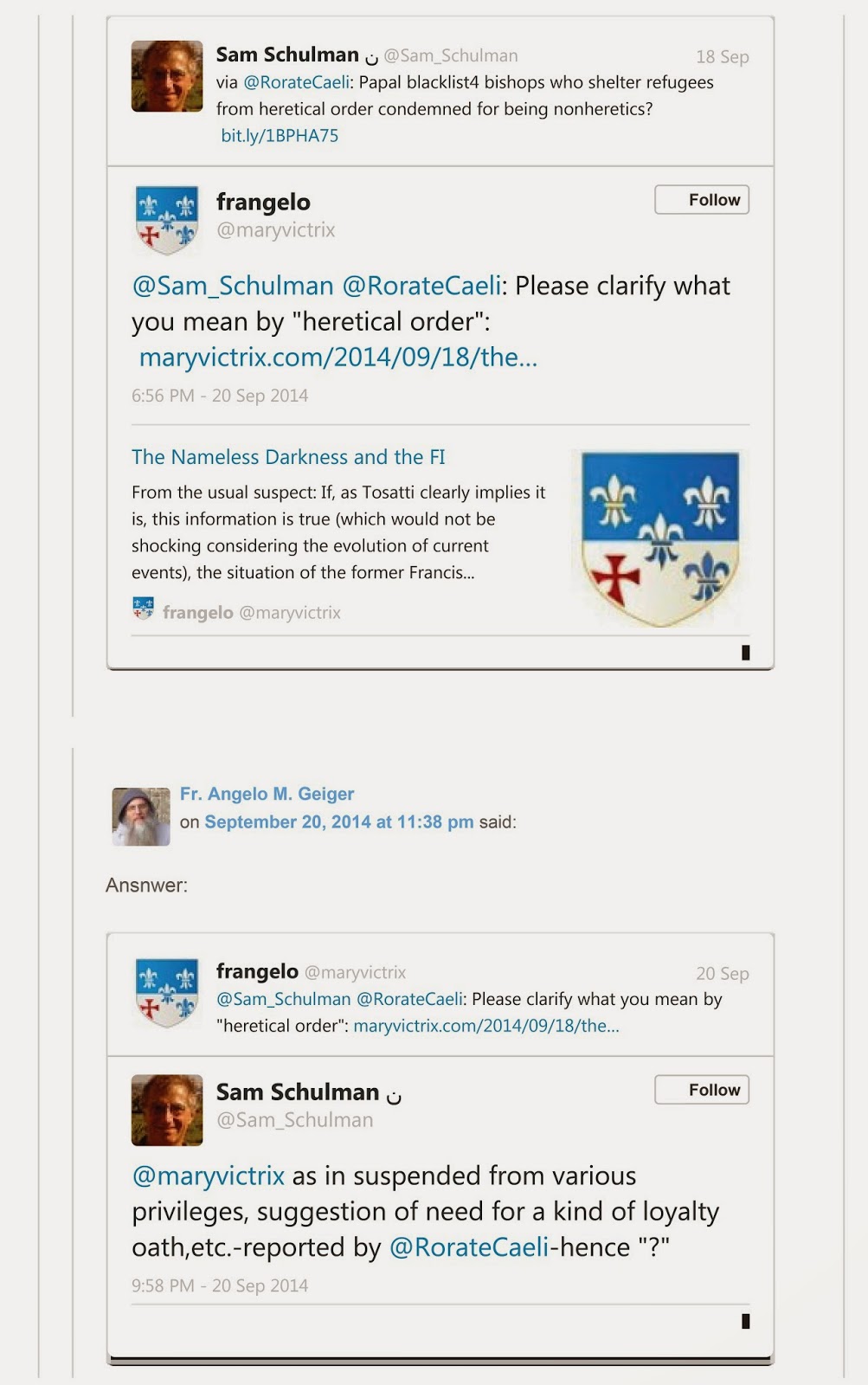 It would appear that my interpretation was closer to the mark.

By Tradical July 30, 2020
+ JMJ Update: There was a bit of an uproar over the consecrating bishop messing up / mumbling the key words of the consecration.  This, I am told, resulted in a do-over conditional consecration.  It would be funny if it weren't so serious and sad. :-(
I've had a series of "Error of the 'resistance' for years and now they've made their biggest mistake: Fr. Pfeiffer appears to have succeeded in conning some poor people into consecrating him a bishop.
I don't know who the consecrating bishop was (on the left in the photo) but wow - based on previous reports it took him close to a decade (apparently Bishop Williamson refused) to find someone to consecrate him as a bishop.
Given his doctrinal issues, I predict it won't be too long before he get's himself elected the pontiff of the 'resistance', just to one-up Bishop Williamson.
Well, they need prayers, lots of prayers, to remove the beam from their own eye(s).

A 'Thirty Day Prayer to the Blessed Virgin Mary ' was said by many Catholics during troubled times in their lives up until Vatican II. While looking through old stored away boxes, I came across a small white prayer book of the kind give…
2 comments
Read more